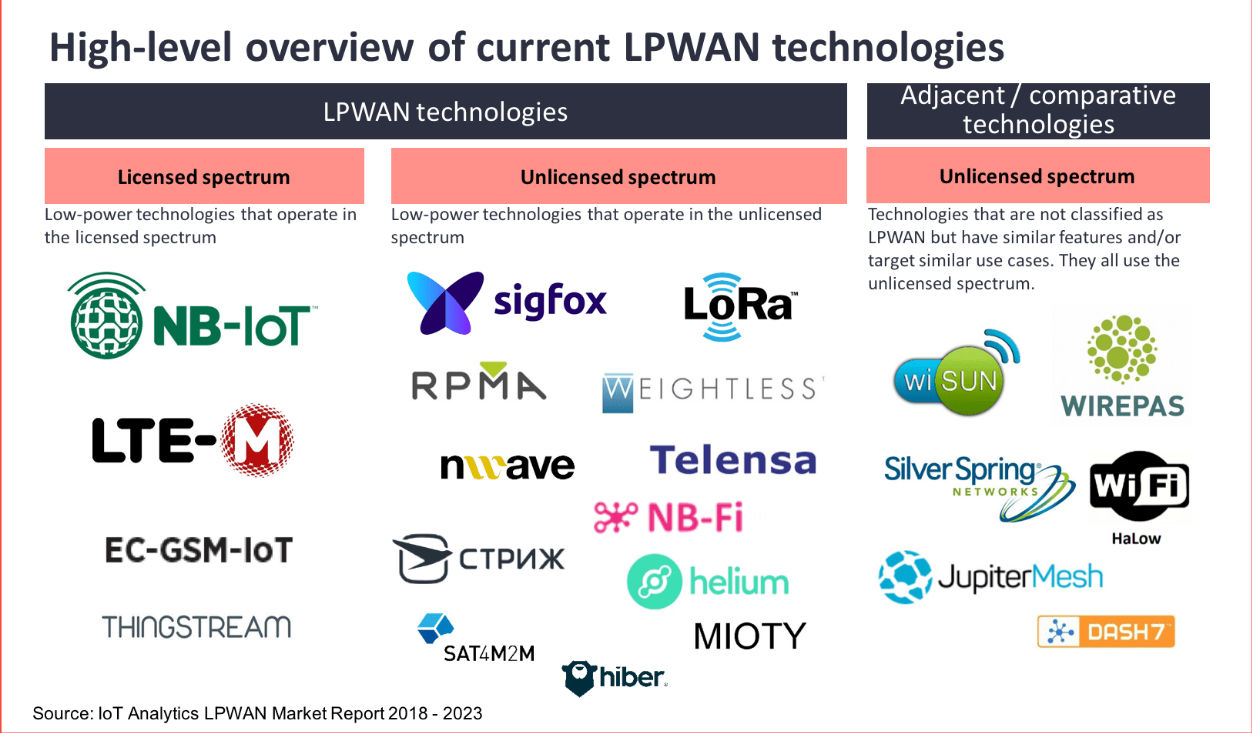 Let us now discuss a protocol for long range communication in power constrained devices. The LPWAN class of protocols is low bit-rate communication technologies for such IoT scenarios.

Let us now discuss some of the most common technologies in this area. Narrow band IoT: it is a technology made for a large number of devices that are energy constrained. It is thus necessary to reduce the bit rate. This protocol can be deployed with both the cellular phone GSM and LTE spectra. The downlink speeds vary between 40 kbps (LTE M2) and 10 Mbps (LTE category 1). Sigfox: it is one more protocol that uses narrow band communication (10 MHz). It uses free sections of the radio spectrum (ISM band) to transmit its data. Instead of 4G networks, Sigfox focuses on using very long waves. Thus, the range can increase to a 1000 kms. Because of this the energy for transmission is significantly lower (0.1%) than contemporary cell phones. Again the cost is bandwidth. It can only transmit 12 bytes per message, and a device is limited to 140 messages per day. This is reasonable for many kinds of applications: submarine applications, sending control (emergency) codes, geolocation, monitoring remote locations, and medical applications. Weightless: it uses a differential binary phase shift keying based method to transmit narrow band signals. To avoid interference, the protocol hops across frequency bands (instead of using CSMA). It supports cryptographic encryption and mobility. Along with frequency hopping, two additional mechanisms are used to reduce collisions. The downlink service uses time division multiple access (TDMA) and the uplink service uses multiple subchannels that are first allocated to transmitting nodes by contacting a central server. Some applications include smart meters, vehicle tracking, health monitoring, and industrial machine monitoring. Neul: this protocol operates in the sub-1 GHz band. It uses small chunks of the TV whitespace spectrum to create low cost and low power networks with very high scalability. It has a 10 km range and uses the Weightless protocol for communication. LoRaWAN: this protocol is similar to Sigfox. It targets wide area network applications and is designed to be a low power protocol. Its data rates can vary from 0.3 kbps to 50 kbps, and it can be used within an urban or a suburban environment (2–5 kms range in a crowded urban area). It was designed to serve as a standard for long range IoT protocols. It thus has features to support multitenancy, enable multiple applications, and include several different network domains.

In this Video, I am going to discuss the What is internet of things (IOT) in Internet of things (IoT) with examples. The internet of things, or IoT, is a system of interrelated computing devices, mechanical and digital machines, objects, animals or people that are provided with unique identifiers (UIDs) and the ability to transfer data over a network without requiring human-to-human or human-to-computer interaction.
25-jan-2022 /24 /651

FEATURE Ultimate IoT implementation guide for businesses IoT can offer many benefits to the enterprise, but it can be a challenge to implement. Learn the requirements and use best practices for a successful deployment.
26-jan-2022 /24 /651

Although the risks are generally well understood, the sheer volume and diversity of IoT devices requires a greater level of attention and control than a business might otherwise exercise.
26-jan-2022 /24 /651
﻿