What are the Architectures and Protocols in IoT?. The Complete Internet of things (IoT) Developer Course 2022 [Videos].

There is no single consensus on architecture for IoT, which is agreed universally. Different architectures have been proposed by different researchers.

The most basic architecture is a three-layer architecture [3–5] as shown in Figure 1. It was introduced in the early stages of research in this area. It has three layers, namely, the perception, network, and application layers.(i)The perception layer is the physical layer, which has sensors for sensing and gathering information about the environment. It senses some physical parameters or identifies other smart objects in the environment.(ii)The network layer is responsible for connecting to other smart things, network devices, and servers. Its features are also used for transmitting and processing sensor data.(iii)The application layer is responsible for delivering application specific services to the user. It defines various applications in which the Internet of Things can be deployed, for example, smart homes, smart cities, and smart health. 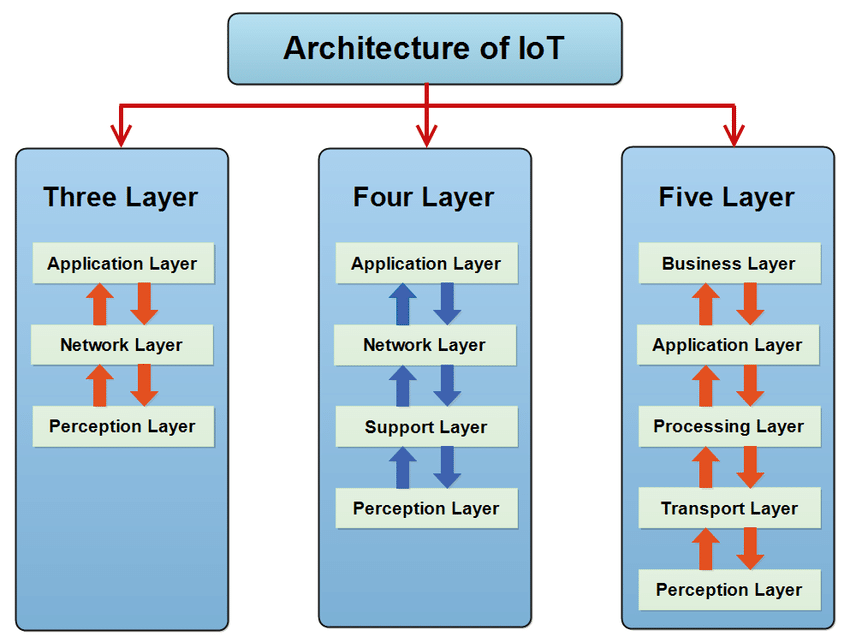 The three-layer architecture defines the main idea of the Internet of Things, but it is not sufficient for research on IoT because research often focuses on finer aspects of the Internet of Things. That is why, we have many more layered architectures proposed in the literature. One is the five-layer architecture, which additionally includes the processing and business layers [3–6]. The five layers are perception, transport, processing, application, and business layers (see Figure 1). The role of the perception and application layers is the same as the architecture with three layers. We outline the function of the remaining three layers.(i)The transport layer transfers the sensor data from the perception layer to the processing layer and vice versa through networks such as wireless, 3G, LAN, Bluetooth, RFID, and NFC.(ii)The processing layer is also known as the middleware layer. It stores, analyzes, and processes huge amounts of data that comes from the transport layer. It can manage and provide a diverse set of services to the lower layers. It employs many technologies such as databases, cloud computing, and big data processing modules.(iii)The business layer manages the whole IoT system, including applications, business and profit models, and users privacy. The business layer is out of the scope of this paper. Hence, we do not discuss it further.

Another architecture proposed by Ning and Wang [7] is inspired by the layers of processing in the human brain. It is inspired by the intelligence and ability of human beings to think, feel, remember, make decisions, and react to the physical environment. It is constituted of three parts. First is the human brain, which is analogous to the processing and data management unit or the data center. Second is the spinal cord, which is analogous to the distributed network of data processing nodes and smart gateways. Third is the network of nerves, which corresponds to the networking components and sensors.

At below we are discussing Architecture of IoT in detail:

1. The lowest & middle a part of IoT software is the sensors and electronic gadgets this is in a position to connect with things & grasp the facts from it.

2. Sensor gathers the records however that we need to convert it into understandable format & join the one’s sensor device using some protocol that we want to configure right here in layer two and also clear out statistics i.e. placed a few thresholds on your information for taking smart selection. 5. At this level, we are able to persist our good judgment, use this information for taking clever selection or for reporting purpose. That is the important layer, in which our definite product & business common sense comes into the image.

6. This residue wherein we are able to say its presentation layer or choice taken layer. Primarily based on the requirement we will display reviews or applying system learning or some custom common sense and takes clever choice and ship signal again to the sensors.

7. That is in which our God exists. For whom we’re layout this whole product. The consumer engages with this sediment that is the UI layer. Hence, in this IoT Architecture tutorial, we learned the architecture of Internet of Things system. Furthermore, if you have any query, feel free to ask in the comment section.

In this Video, I am going to discuss the What is internet of things (IOT) in Internet of things (IoT) with examples. The internet of things, or IoT, is a system of interrelated computing devices, mechanical and digital machines, objects, animals or people that are provided with unique identifiers (UIDs) and the ability to transfer data over a network without requiring human-to-human or human-to-computer interaction.
25-jan-2022 /24 /641

FEATURE Ultimate IoT implementation guide for businesses IoT can offer many benefits to the enterprise, but it can be a challenge to implement. Learn the requirements and use best practices for a successful deployment.
26-jan-2022 /24 /641

Although the risks are generally well understood, the sheer volume and diversity of IoT devices requires a greater level of attention and control than a business might otherwise exercise.
26-jan-2022 /24 /641
﻿