How to Redirections in Laravel?. The Complete Laravel Developer Course 2022 [Videos].

Named route is used to give specific name to a route. The name can be assigned using the “as” array key.

Note − Here, we have given the name profile to a route user/profile.

Step 1 − Create a view called test.php and save it at

Step 2 − In routes.php, we have set up the route for test.php file. We have renamed it to testing. We have also set up another route redirect which will redirect the request to the named route testing.

Step 4 − After execution of the above URL, you will be redirected to http://localhost:8000/test as we are redirecting to the named route testing.

Step 5 − After successful execution of the URL, you will receive the following output −

Step 2 − After successful execution, you will receive the following output − 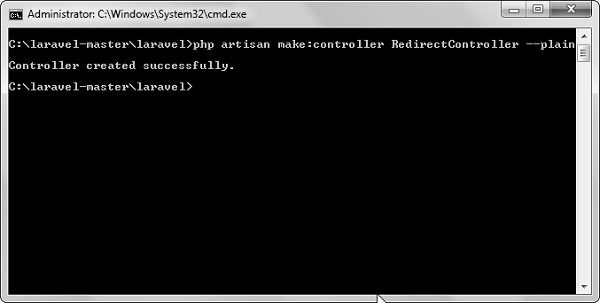 Step 5 − Visit the following URL to test the example.

Step 6 − The output will appear as shown in the following image.

How to install Laravel ?

For managing dependencies, Laravel uses composer. Make sure you have a Composer installed on your system before you install Laravel. In this chapter, you will see the installation process of Laravel.
14-Feb-2022 /15 /490

What is Laravel - Application Structure?

How to setup Configuration in Laravel?