EF maintains the state of each entity during its lifetime. Each entity has a state based on the operation performed on it via the context class (the class which is derived from DbContext class). The entity state represented by an enum i.e. System.Data.Entity.EntityState has the following values. 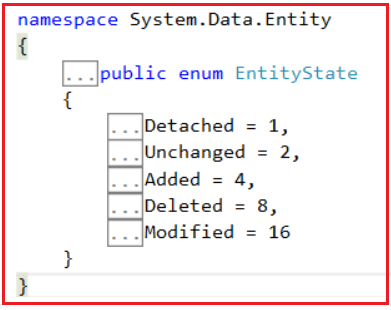 The Context not only holds the reference to all the entity objects as soon as retrieved from the database but also keeps track of entity states and maintains modifications made to the properties of the entity. This feature is known as Change Tracking.

State Changes in the Entity Lifecycle

The change in the entity state from the Unchanged to the Modified state is the only state thats automatically handled by the context class. All other changes must be made explicitly by using the proper methods of DbContext class. The following diagram shows the different states of an entity in the Entity Framework.

The property values of the entity have not been modified since it was retrieved from the database. SaveChanges ignores this entity. This is the default state the entities will be in when we perform the query and also whenever we attach an entity to the context using Attach() method.

Whenever we add a new entity to the context using the AddObject() method, the state of the entity will be in the Added state. Added entity state indicates that the entity exists in the context, but does not exist in the database. DbContext generates the INSERT SQL query and insert the data into the database when the saveChanges method is invoked. Once the saveChanges are successful the state of the entity is changed to Unchanged

In the Connected environment, the Entity framework also keeps track of the properties that have been modified. The Columns in the Update statement are set for only those columns, whose values are modified.

Thus, entity states play an important role in Entity Framework. We will discuss all these entity states with the example in our upcoming Videos.

What is the Entity Framework?

Entity Framework is an Open-Source Object-Relational Mapping (ORM) Framework for .NET applications that enables .NET developers to work with relational data using domain-specific objects without focusing on the underlying database tables and columns where actually the data is stored. That means the Entity Framework eliminates the need for writing the data-access code that developers usually need to write.
11-Feb-2022 /37 /434

What is Entity Framework Architecture?

What is Context Class in Entity Framework?