What are the challenges of IOT?. The Complete Internet of things (IoT) Developer Course 2022 [Videos].

IoT projects can bring strong benefits to the business regardless of the deployment scope. But IOT can also pose serious challenges that a business must recognize and consider before undertaking any IoT project.

Project design. Although IoT devices watchily implement a variety of standards, such as Wi-Fi or 5G, there are currently no significant international standards that guide the design and implementation of IoT architectures -- theres no rulebook to explain how to approach an IoT project. This allows for a great deal of flexibility in design, but also allows for major design flaws and oversights. IoT projects should generally be led by IT staff with IoT expertise, but such know-how shifts day to day. Ultimately, there is no substitute for careful, well-considered design and demonstrated performance based on copious testing and proof-of-principle projects.

Data storage and retention. IoT devices produce enormous amounts of data, which is watchily multiplied by the number of devices involved. That data is a valuable business asset that must be stored and secured. And unlike traditional business data, such as emails and contracts, IoT data is highly time sensitive. For example, the vehicles speed or road data conditions reported yesterday or last month might have no timeliness today or next year. This means IoT data might possess a radically different lifecycle than traditional business data. This requires a significant investment in storage capacity, data security and data lifecycle management.

Network support. IoT data must traverse an IP network, such as a LAN or the public internet. Consider the effect of IoT device data on network bandwidth and ensure that adequate, reliable bandwidth is available. Congested networks with dropped packets and high latency can delay IoT data. This might involve some architectural changes to the network and addition of dedicated networks. For example, rather than pass all IoT data across the internet, a business might opt to deploy an edge computing architecture that stores and preprocesses the raw data locally before passing only curated data to a central location for analysis.

Device and data security. IoT devices are small computers connected to a common network, making them vulnerable to hacking and data theft. IoT projects must implement secure configurations to protect devices, data in flight and data at rest. A proper and well-planned IoT security posture might have direct implications for regulatory compliance.

Device management. One often overlooked problem is the proliferation of IoT devices. Every single IoT device must be procured, prepared, installed, connected, configured, managed, maintained and ultimately replaced or retired. Its one thing to deal with this for a few servers, but another problem entirely for hundreds, thousands or even tens of thousands of IoT devices. Consider the logistical nightmare involved in battery procurement and replacement for thousands of remote IoT devices. IoT leaders must employ tools to manage IoT devices from initial setup and configuration through monitoring, routine maintenance and disposition.

Read more about the internet of things:

IT and business leaders must embrace the considerations of security and compliance in any IoT deployment. IoT devices present the same basic security vulnerabilities found in any networked computer. The problem with IoT is volume:

IoT security can pose problems for businesses because weak default security is multiplied by countless of devices that all rely on human monitoring and management efforts. The attack surface can be enormous. Thus, IoT security comes down to three principal issues:

Still, IoT devices are plagued by a range of potentially devastating attacks that include botnet attacks, weak DNS systems that can allow the introduction of malware, ransomware, the potential attack vectors caused by unauthorized and unsecured devices on the network and even the threat of physical security.

Security risks carry corresponding risks to an organizations compliance posture. Imagine what happens when patient data is stolen from a medical IoT infrastructure or a business cant manufacture products because hackers have infected the IoT infrastructure with ransomware. Such events create potential compliance headaches for business leaders and regulators. Any discussion of IoT security must include a careful evaluation of compliance.

IoT is still evolving. There are no common, broadly adopted standards for designing, configuring, operating and securing an IoT infrastructure. In most cases, all a business can do is document design and process decisions and attempt to correlate them to other IT best practices. One example is to choose IoT devices that adhere to existing technological standards, such as IPv6, and connectivity standards, including Bluetooth Low Energy, Wi-Fi, Thwatch, Zigbee and Z-Wave. Its a good start, but often not enough.

Fortunately, additional compliance standards are emerging from industry-leading organizations, such as the IEEE. IEEE 2413-2019 is the IEEE Standard for an Architectural Framework for IoT. The standard offers a common architectural framework for IoT across transportation, health care, utility and other domains. It conforms to the international standard ISO/IEC/IEEE 42010:2011. Although such standards dont guarantee compliance by themselves, organizations that follow the established frameworks and practices can strengthen existing compliance postures in IoT implementation.

Getting countless individual IoT devices set up can be a daunting task, but processing that data to divine useful business intelligence can bring its own problems, too. As the IoT industry evolves, the IoT ecosystem is expanding to bring new support for IoT implementation and facilitate new business models.

One of the biggest issues with IoT is simply getting it to work. Infrastructure demands can be extensive, security is often problematic, and processing can add new complexity for the business. IoT vendors are addressing these problems with a growing number of Saas platforms designed to simpilify IOT adotion and eliminate many of the deep investments typically needed for gateways, edge computing and other IoT-specific elements.

IoT SaaS operates between the IoT device field and the enterprise. SaaS handles many of the important elements that an enterprise must otherwise provide. For example, the SaaS offering typically handles mundane infrastructure tasks, such as data security and reporting. But the SaaS offering will often include much of the high-level processing and computing, such as analytics, with additional support for ML. This relieves the enterprise data center from this IoT burden, and the business can focus on receiving and using the resulting analyses. 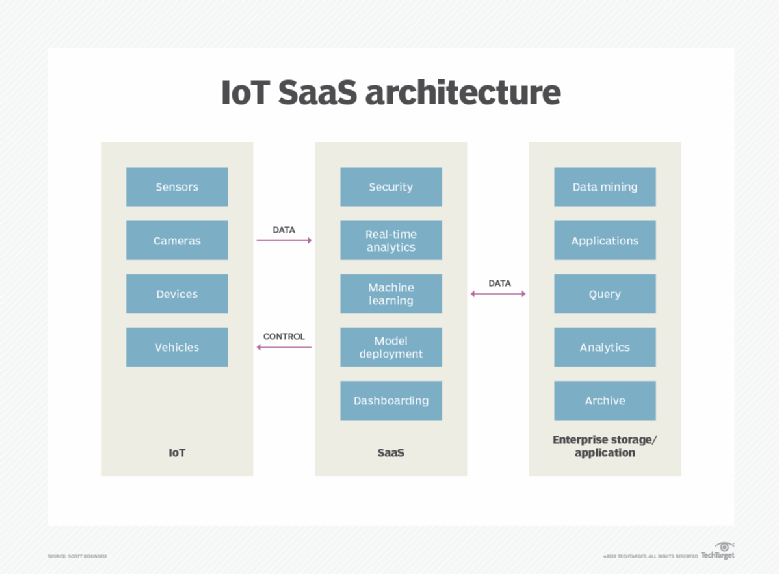 In this Video, I am going to discuss the What is internet of things (IOT) in Internet of things (IoT) with examples. The internet of things, or IoT, is a system of interrelated computing devices, mechanical and digital machines, objects, animals or people that are provided with unique identifiers (UIDs) and the ability to transfer data over a network without requiring human-to-human or human-to-computer interaction.
25-jan-2022 /24 /219

FEATURE Ultimate IoT implementation guide for businesses IoT can offer many benefits to the enterprise, but it can be a challenge to implement. Learn the requirements and use best practices for a successful deployment.
26-jan-2022 /24 /219

Although the risks are generally well understood, the sheer volume and diversity of IoT devices requires a greater level of attention and control than a business might otherwise exercise.
26-jan-2022 /24 /219
﻿